Ubuntu just went too far with the snap crap. Back to Debian!

I first installed Linux in 1994 (I think). The kernel was pre-1.0 and the distribution was slackware - if it was even called that then. A huge stack of floppies. I would compile my own kernel and fail all the time and have to revert back to a known good kernel. That was in the LILO days, way before grub.

But, as one gets older and has less free time I just wanted things to work. I didn’t want to build everything from source. I just wanted to install software and use it. I had used Debian for years because it was stable, but over time I also wanted to play a lot. I was doing a lot of embedded development for my robotics hpobbies and generally playing with a lot of stuff. And getting proprietary drivers onto my machines was something I didn’t have a lot of time for and Debian is famous for open source purity. Ubuntu was easily the most popular so I went with it. I totally hated Unity and actually went to Mint for a long time but in January of 2019 I went back to Ubuntu. I blogged about it even.

These past weeks I’ve been doing a lot of playing with some small computers, including a new Raspberry Pi4 (which I returned in disgust, but that’s a different post). I was burning bootable ISOs to USB thumb drives quite a bit. Along the way I found that for whatever reason, if I burned it from my Ubuntu notebook the drive would not boot. I never did really solve that, for reasons that will become apparent in a moment.

What really drove me nuts what the whole snap thing, adding a ton of mounted filesystems to my machine. WTF was all that? 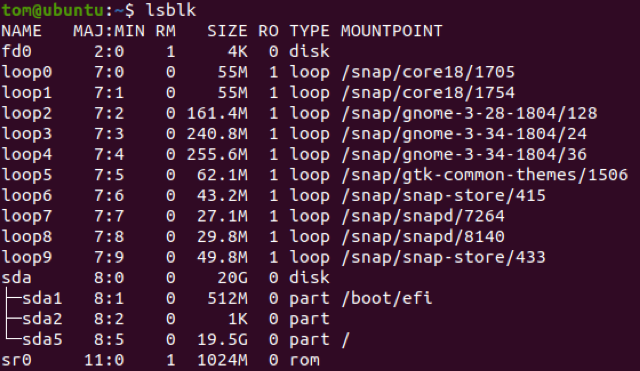 I forgot to take a screen shot of the insanity but found this shot in my research. It turns out that lots of folks are pissed about this, and the Hackaday article is pretty good. Go read that. It will do a better job than I will explaining this mess.

So what was the problem? I plugged in a USB thumb drive and typed ‘lsblk” and suddenly had this HUGE long list of snap packages mounted on loopback. I had NEVER used snap - only apt. Seeing what drives were mounted was cluttered by all this unwanted, never asked for loopback snap crap. I was amazed and angry. A fast google search and I found I was not alone. Go back. Read that article. it will explain it all.

tl;dr: Ubuntu was using snap to install software behind my back. I didn’t want to use snap, but they were doing it without asking. And it’s totally proprietary to Cannonical. And it’s a totally stupid approach that solves THEIR business problem at the expense of their users.

Here’s my core point: Cannonical is playing the same kind of games that Microsoft did back in the day. Embrace and Extend. Snap is a terrible idea. It’s a hack at best. They could have gone open source - even gone towards using actual container technology but they did not. They invented something proprietary and started ramming it down our throats. It’s abouot control. If you control the distribution of software, you have a control point over the linux world. That was the kind of bad behavior that us Linux folks fought long ago. Why on earth would we support it in a Linux vendor?

It’s still a free country. Cannonical can do what they want with Ubuntu. But I can make choices too - and my open source roots run really deep. So Ubuntu is out. Off my systems. I grabbed Debian Buster and to my surprise it installed easily on my Dell. I had to install non-free wifi:

I did have to re-install when I also put the Nvidia drivers on and I lost all my video. I still don’t have working HDMI output but I’ll fiddle with that next week. I am writing this from Tahoe (snuck away for a few days of warmth in the mountains) and I have not even booted my work MacBook Pro. I’m using my Debian notebook and am completely happy.

I’ll post more later about how I fix the HDMI issue. But for now, I’m just happy to have a real linux system again.