I’m building a board for robotics, but it’s also useful for IoT and home automation. What’s it do? What problem does it solve? It’s basically a WiFi interface to a variety of I2C-driven devices (motors or sensors). The I2C side is Engineered to be highly robust and reliable.

The RBOT platform is aimed at folks doing robotics - but it’s also easily used for IoT and home automation. One of my core values is the strong desire for this to be a means for learning and education, so it’s an open platform and open source solution. Electronics hobbyists can extend it because it’s open. Software hobbyists can purchase kits to just use it without knowing much about the hardware. Makers can do both! More importantly it’s an easy to use, SOFTWARE FIRST robotics kit suitable for middle-school through Junior College educational use.

This is a work in progress. Consider it a vision more than a real product spec. I definitely expect that as I progress it will change. Once real users start to use RBOT it will definitely morph again. I am taking a “customer development” approach to this. I am currently in the Customer Discovery phase.

A Platform for Learning

My top three problems being solved are:

Using sensors is key to doing anything interesting in robotics, IoT and home automation. It’s easy to wire up an typical I2C/SMB two-wire sensor to a few pins on an Arduino and you have a sensor and you can write some code in the Arduino IDE to do something. There’s even a few robotics kits built around that. But try to use five or six sensors at once. Not so easy. Want to do it in python? Hmmm. Want to build your own sensor and then use it? Double hmmm. You run into problems. Using multiple I2C sensors means understanding the I2C addressing, and then even if you avoid address conflicts you can add a device in parallel - I2C is a bus, after all - and suddenly nothing works anymore. Groan. If what you really want to do is play with the software side of robotics anyway suddenly you are trapped in hardware hell and you likely don’t have the tools to solve what’s wrong. You likely need an Oscilloscope and a some electronics knowledge.

Likewise, if you want to focus on the software side and just follow the Arduino postings and cut and paste code in the Arduino IDE that’s cool, but you are then limited to the power of the Arduino controller you are using and doing any kind of concurrent programming on Arduino is essentially impossible for the non-expert (and even then, most coders I know could not pull of multi-threading in Arduino). How do you interface that to something off the Arduino? You start moving up the food chain and thinking ESP32, but now you are stuck back in low level C or very limited python.

RBOT solves these problems by providing a central device hub that you connect to over WiFi. It lets you use up to eight (8) “smart RBOT devices” and another eight (8) simple digitial inputs - all at the same time, all in real-time and in parallel. The best part is that you can access all the devices and their data over WiFi using a simple-to-use API. The RBOT board uses an inexpensive ESP32 daughterboard ($8 currently) programmed with the open source RBOT firmware that abstracts all the hardware complexity from the developer. The source code for the ESP32 is open source, so you can change it if you want to. Or you can just use it, plug and play, and concentrate on writing robotics code. Using a set of initial RBOT devices - a motor, some sensors - you can plug them in and start building code to make it go within minutes. And you can use whatever language you want, from whatever device you want. Use your phone! Use your notebook! Use a Raspberry Pi operating as an embedded controller! In any language that supports networking.

And, because the whole RBOT spec is open it allows development of new sensor and actuator applications. You can use Arduino tooling and boards and make your own new custom sensor, or dive deep into more advanced embedded system design and drive the cost out of your connected RBOT device.

in short: it’s a PLATFORM FOR LEARNING ROBOTICS.

Why am I Building RBOT?

In my career I have used a number of sensor systems as a user and developer. I was a Nuclear-trained Electronics Technician in the Navy (served in submarines), when I fell in love with instrumentation and control systems - especially for complex systems (like a submarine nuclear reactor). After the Navy I worked for an R&D lab for 5 years (at PG&E, before California stupidly de-regulated) where we built remote sensing applications for gas and power systems. I worked as the on-board Engineering support for the folks who found the Titanic: Woods Hole Oceanographic Institute (WHOI) where I was responsible for all the non-shipping sensors and systems and supported the data and video systems on the deep diving submarine Alvin. As a Software Engineer and at various levels of management I’ve worked in internet telephony, internet video, smart TV data systems, and complext network data collection systems.

I’ve also coached middle-school and high-school robotics for the last 7 years where I have seen many educational robotics systems first hand for what they can, and cannot do. Today’s FIRST and VEX systems are amazing, powerful, educational and fun. But they are primarily MECHANICAL FIRST approaches that focus on REMOTE CONTROL. The new VEX compiler suite is so much better, for sure… but it’s still limited to one fairly limited controller programmed either in their C++ or their non-technical block language. FIRST allows use of Java but again, it’s a closed ecosystem. Kids in high school should be learning python, or even golang! The AP Computer Science courses have a huge emphasis on javascript. Shouldn’t a robotics system allow a creative teacher to link those classes to sensing and moving in the real world? Of course. And that’s the drive behind RBOT.

The RBOT vision is to provide a SOFTWARE FIRST kit and platform. Connectors and the core device technology should be easily obtainable, open standard, and open source. If you want to put a sensor five feet from the micro-controller you shouldn’t have to buy some special, over-priced cable when a normal Ethernet cable will do the trick nicely.

What Will I Have to Buy?

Nothing, if you really want to make it all yourself. Some folks will want that. Most will be happy to buy an RBOT Main Board and some core sensors and actuators. If we do this right, there’s be a marketplace where creative roboticists can make and sell their own additional sensors and actuators, especially as newer chips and sensors, and smaller motors become available. If it makes it’s way into flight or undersea bots, then all the better! Yes, I’ll sell RBOT hardware and I’ll need to make a profit of some kind to recoup the investment I’ve made. But unlike some other systems, we don’t aim to lock anyone into a specific proprietary solution. I think we can do just fine with an open approach.

What’s the Connection to VEX?

None, except that I coach VEX team 8255 at Sacred Heart Cathedral Preparatory in San Francisco. As such we have thousands of dollars of VEX parts and my students are my first testers. We just upgraded to the new VEX v5 control system. One downside of this is that it cannot use the old motors and batteries. So I plan to make lemonade from that lemon and early RBOT devices will allow you to use older VEX 293 motors and motor controllers and shaft encoders. Waste not, want not.

I believe in question and answers, and sometimes the best way to quickly share a lot of information is through that format. 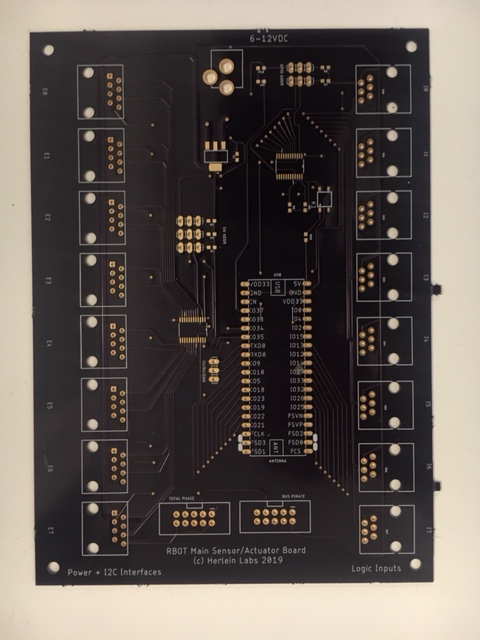